Shri Krishna had to fight with these relatives in Mahabharata. 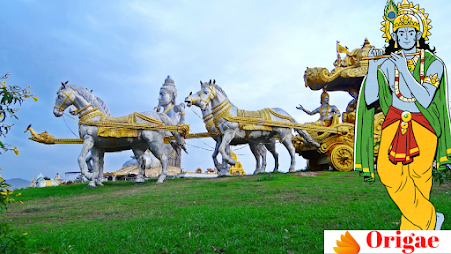 Lord Krishna had many enemies in the Mahabharata, out of which the biggest enemy was Jarasandha, the ruler of Magadha. Although we will tell here only about those people in brief, despite being the relative of Lord Shri Krishna, he was his staunch enemy.

1. Kansa’s maternal uncle:  Kansa was the maternal uncle of Lord Krishna. He had himself become the king of Shursen district by removing his father Ugrasen from the post of the king. Kansa knew that the eighth son of my sister Devaki would be the cause of my death.

This was the reason that he wanted to kill Lord Shri Krishna at any cost. Even after many efforts, when he could not kill the child Krishna, then according to the plan, Kansa invited Krishna and Balarama on the occasion of a function.

He wanted to kill Krishna there, but in that ceremony, Krishna grabbed Kansa by the hair, dragged him from his throne, threw him to the ground, and then killed him.

After killing Kansa, Devaki and Vasudeva were freed and they worshiped at the feet of their parents. But due to this one incident, Jarasandha became his staunch enemy, because Kansa was the Jamai of Jarasandha. It was because of Jarasandha that the war between Krishna and Kalayavan took place.

Knowing about this Akashvani and his birth, many brave kings came to see him. Shishupala’s father gave the child in turn in the lap of all the heroes and kings.

In the end, as soon as Shishupala’s cousin went into the lap of Shri Krishna, his two arms fell to the earth and the frontal eye merged with the frontal. On this, the mother of the child was saddened and demanded from Shri Krishna to save his life. Shri Krishna said that I promise to forgive 100 of his crimes.

There were many reasons why Shishupala was an enemy. One of the reasons was that Shishupala wanted to marry Rukmani, the sister of his friend Rukma. But he cannot do this. Rukmani was married to Lord Krishna. Later on, Shishupala humiliated and abused Shri Krishna many times, but Shri Krishna forgave him every time.

Duryodhana had committed three mistakes. The first is that he selected his Narayani army instead of Sri Krishna. Secondly, even after asking his mother lac, he went in front of her wearing a nappy made of tree leaves.

Thirdly, the third and last mistake he had made was the mistake of going to war in the end. Had he gone earlier, he could have understood many things, and perhaps the lives of his brother and friends would have been saved.

But Shri Krishna told Duryodhana that the main reason for your defeat was your unrighteous behavior and getting your own bride-to-be to be stripped. You wrote your destiny by your actions.’

It was because of Krishna that Karna had to donate his Kavach and Kundals to Indra. On the seventeenth day of the war, Shalya was made Karna’s charioteer. On that day a fierce battle takes place between Karna and Arjuna.

During the battle, Shri Krishna takes his chariot to the side where there is a swamp nearby. Karna’s charioteer does not see this and a wheel of his chariot gets stuck in the swamp.

Karna tries to remove the stuck wheel of the chariot. To take advantage of this opportunity, Shri Krishna asks Arjuna to shoot arrows. Arjuna with great helplessness kills Karna in a helpless state. After this, the Kauravas lose their enthusiasm.

Their morale breaks down. Then surgical chiefs are made commanders, but they too are killed by Yudhishthira at the end of the day. Shri Krishna had done many undertakings to save Arjuna.

5. Mitravanda: Vind and Anuvind were the kings of Avanti. His sister Mitravinda wanted to make Shri Krishna her husband in the swayamvara, but her brothers stopped her because they were the descendants and followers of Duryodhana.

6. Rukma: According to the Mahabharata, Rukmini, the daughter of King Bhishmak of Vidarbha, had five brothers – Rukma, Rukmaratha, Rukmabahu, Rukmakes, and Rukmini.

Rukmini started preparations for marriage by fixing his sister’s relationship with Shishupal, despite the opposition of the parents. When Rukmini came to know about this, she was very sad.

He sent a Brahmin to Dwarka Shri Krishna to express his determination. Ultimately, due to the opposition of Rukma and Shishupala, Shri Krishna had to abduct Rukmini and marry her. Shri Krishna also had to fight with Rukmi during this time.